The KNK Force and Zing Orbit require a steady network connection between themselves and the devices controlling them. If you think you might be having connectivity issues, here’s a basic way to validate your suspicions.

Ping is networking utility that sends a packet of information to a device and then measures the amount of time it takes to receive the “I got it!” message back from that device and whether anything went wrong during transmission.

The command format is:  ping <ipaddress>

Here’s how to use ping to determine whether some networking gremlins may be causing your grief: 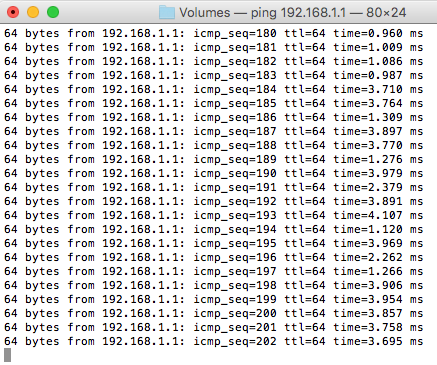 Let it run for a few minutes.  You can either keep an eye on it or scroll up and see previous entries.  You can also keep the window open while using your machine and compare any blips you see in during cutting with the ping responses, which may offer some additional insight.

That may all look like gobbledygook, but the primary thing we want to note here is the time.  All my times are pretty close to one another — 1-4 milliseconds.  This is what a good ping response looks like.

If my times had occasional spikes of 30ms, 250ms, etc. then something might be slowing down my network traffic.  Other concerns would be errors such as Destination Unreachable or Network Timeout or No Route to Host.

f the network connection between your computer and your cutter is flaky, you very well try to do something at a bad time and see an error.

Be wary of using devices such as “Wireless Range Extenders” as these actually slow your network down and can cause additional problems.  Game systems like Playstations and Xboxes will saturate a wireless network when in use.  Streaming videos may work flawlessly on your network, but streaming can survive less-than-ideal network conditions.

There are some alternative options if wireless is proving difficult:

If you have a KNK Force and your machine is or can be near your router, use a cable.  Cables are reliable.  You can buy a 50′ flat CAT6 ethernet cable on Amazon for $13.

Direct Ethernet Connection: If you have a computer near your Force that has both wired and wireless network interfaces, you can connect the computer to your wireless and use a network cable to connect directly to your Force.  This uses your operating system’s network bridging functionality to link the two.

For the Zing Orbit, there’s no network port so your default fallback will be a USB cable.  Again, cables are better.  If USB is an option for you, you would be better of using a cable in any circumstance. Wireless should be your fallback, not your preference.